When the missus first floated the idea of a week in an ashram, “reluctant” weren’t the word. Don’t get me wrong, I like my yoga as much as the next man, it was the “mandatory” schedule* and the prison-like house rules** that put me off. In the end my curiosity prevailed – if it’s good enough for Steve Jobs, I’ll give it a go.

Day one’s a struggle – I arrive with the two-bob-bits. Our hosts are sympathetic and my condition allows me to dip in and out of the schedule and flout some of the rules (bonus). They give us an intro which explains that it’s a non-religious ashram, “We’re above religion” they say, – some common ground already.

We chat about the daily routine and they ask if I’ve meditated before. My answer, “Yeah, every night… For 8 hours”, doesn’t amuse (they’re a tough crowd). Later during the first meditation I’m told I don’t breathe correctly. I’ve only been doing it that way for 38 years, I’m lucky to be alive (I kept that one to myself). 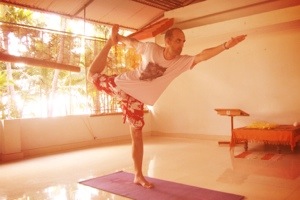 One of the silver linings of my bad back has been finding yoga, and the mental benefits that an “active” meditation brings (such as increased creativity, less anxiety, and a better memory). This more focused meditation is much more difficult. People rave about it, some say it’s better than drugs. I may have to persevere.

Throughout the week we discuss some interesting topics; Indian psychology, spirituality, yoga therapy, and meditation. Much of what I hear seems compatible with modern science. Some of it is quite far out though, like “we’re all part of one cosmic energy or consciousness”. It reminds me of the stuff Russell Brand’s coming out with these days.

However, there were times when it felt like a hippy commune (minus the free love), with the repetitive singing. I don’t mind a bit of Kula Shaker (as you know), but the daily satsang (chanting in Sanskrit) was a step too far. The heathen in me was like a like a fish out of water.

When I asked my fellow inmates (I mean yogis) what they like about the place, I get, “it’s just so peaceful”. For me there’s a fine line between being peaceful and being boring. A bit of chaos and uncertainty keeps life interesting… I’ll stick with the yoga, and take the peace of mind, but for balance I won’t forget to hug the dark.

**House Rules; no shorts, no meat, no shoes (in the house), no internet, no drugs or alcohol, no cutlery (eat with hands), no plastic bottles, and no leaving the house between 6pm and 6am.

Ps. Some words I find relevant.

We are not human beings on a spiritual journey. We are spiritual beings on a human journey.
– Dr. Stephen Covey
(author of The Seven Habits if Highly Effective People)

Strangers on this road we are on.
We are not two we are one.
– Dave Davies, The Kinks
(from the song Strangers, 1970)